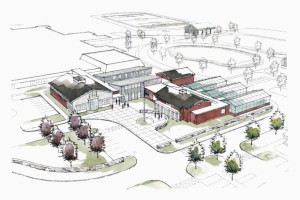 A request for a $29 million bond to finance construction of the Agriscience STEM center at Shepaug Valley School was referred by the House to theCommittee on Finance, Revenue and Bonding in the state Legislature on April 12.

“Of course the bonding for the AgriSTEM center is in danger,” said state Sen. Toni Boucher, R-Wilton, a member of the committee. “You can’t be assured of anything at this point.
“The only thing we are certain of at this time is the uncertainty of it all,” Boucher added. “It’s definitely a time of crisis.”

The Region 12 towns of Bridgewater, Roxbury and Washington are among the 20 municipalities Malloy has proposed to end education cost-sharing. For Bridgewater, that would mean a cut of $123,000 in education funding; Roxbury, $133,000 less and Washington, a reduction of $222,000.

“It seems like they’re taking funding away from towns they perceive can sustain these cuts while continuing to fund inner-city schools,” said Bridgewater First Selectman Curtis Read. “This doesn’t bode well for Agriscience STEM funding.

“We’ll see if the state’s in the mood to bond $29 million when it’s making all of these other cuts,” Read said.

In November, Region 12 voters approved the $39.5 million agriscience project, with the expectation the state pick up the $29 million via a bond issue and local taxpayers would fund the rest.

The project would include the addition of 64,000 square feet of space to the middle-high school and upgrading another 9,500. The academy is expected to open for the 2018-19 school year.

“We are still confident that the AgSTEM program is moving forward,” Cosentino said Thursday. “We are extremely grateful to the Legislature, State Board of Education and the governor for their support.”

But Malloy made it clear Wednesday the state is shy on revenue and tough decisions will have to be made.

“We have an obligation as elected officials to tackle the full scope of our challenge,” Malloy said. “That means we must align our spending with the revenue we actually have, not the revenue we wish we had.

“Our expectations need to change,” the governor said. “We cannot afford to fund everything we always have. If we are to do what’s right for the state, if we are to put Connecticut on a better path for the long-term, then we need to make tough but necessary decisions now to adapt to our new economic reality.”